Spectacular caves in Slovenia - Which one to choose? | Nest Campers
Skip to main content

Spectacular caves in Slovenia - Which one to choose?

While traveling through Slovenia, there are plenty of incredible sights which unfold effortlessly before you as you are making your unforgettable campervan memories. But there are some that need a little bit more effort to be discovered and some are actually hidden under the earth's surface.

In the South-West region of Slovenia the landscape is something special - more diverse, unleveled and with a few or none water surfaces to be seen. Grounds are formed by soluble rocks, mainly limestone, dolomite and gypsum. These rocks do not retain water and are dissolved as slightly acidic rain water makes its way through the cracks and wholes, leaving behind some incredible nature's formations.This type of landscape is called karst and in Slovenia it's called Kras. 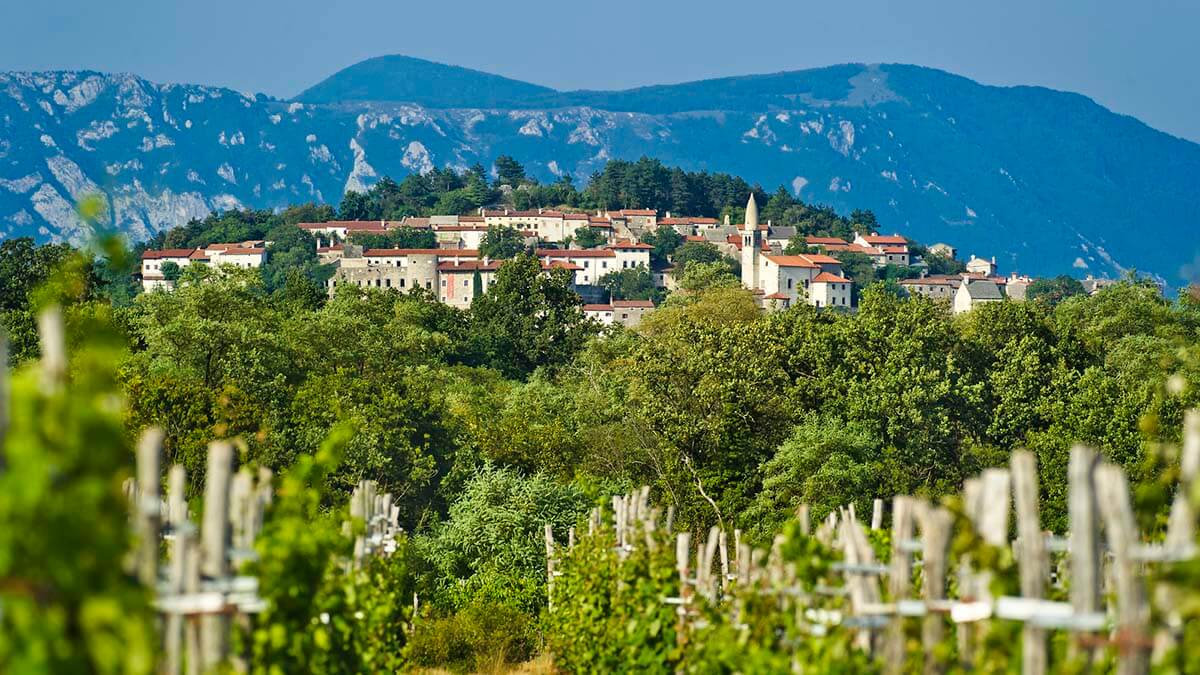 Because the landscape is more or less flat and winds are particularly strong (burja), here we find a very unique build of stone houses and the best of Slovenian prosciutto or “pršut” as we call it. But the main reason why you want to make a stop or two here, are the caves.

This mystical, underground world has been an inspiration for many artists and a feature of Sovenia's national pride. Specatcular caves have been forming for thousands of years and today we are privileged to see their beauty unfold. There are more than 10.000 registered caves in Slovenia, with about 100 newly discovered each year. We can visit quite a few of them, but the grandest and most spectacular of them are Postojnska Cave and The Caves of Škocjan.

Postojna cave, also known as the Queen of the underground world, is the biggest of them all. It is not just one cave but rather a system of 12 different caves, forming one of the most visited attractions in the whole of Europe.

It was discovered by a simple cave lamplighter in 1818, whilst preparing the original cave for a visit of the Austrian Emperor Franz I. As he himself said it at the time of discovery: “There is a new world here, here is paradise!”. And he was right. Today this area is much more than just a cave. It has grown into a Postojna Cave Park uncovering 24km of discovered underground passages, galleries and halls. With more than 38 million visitors in the past 200 years and a cave train ride, it is truly a must see. 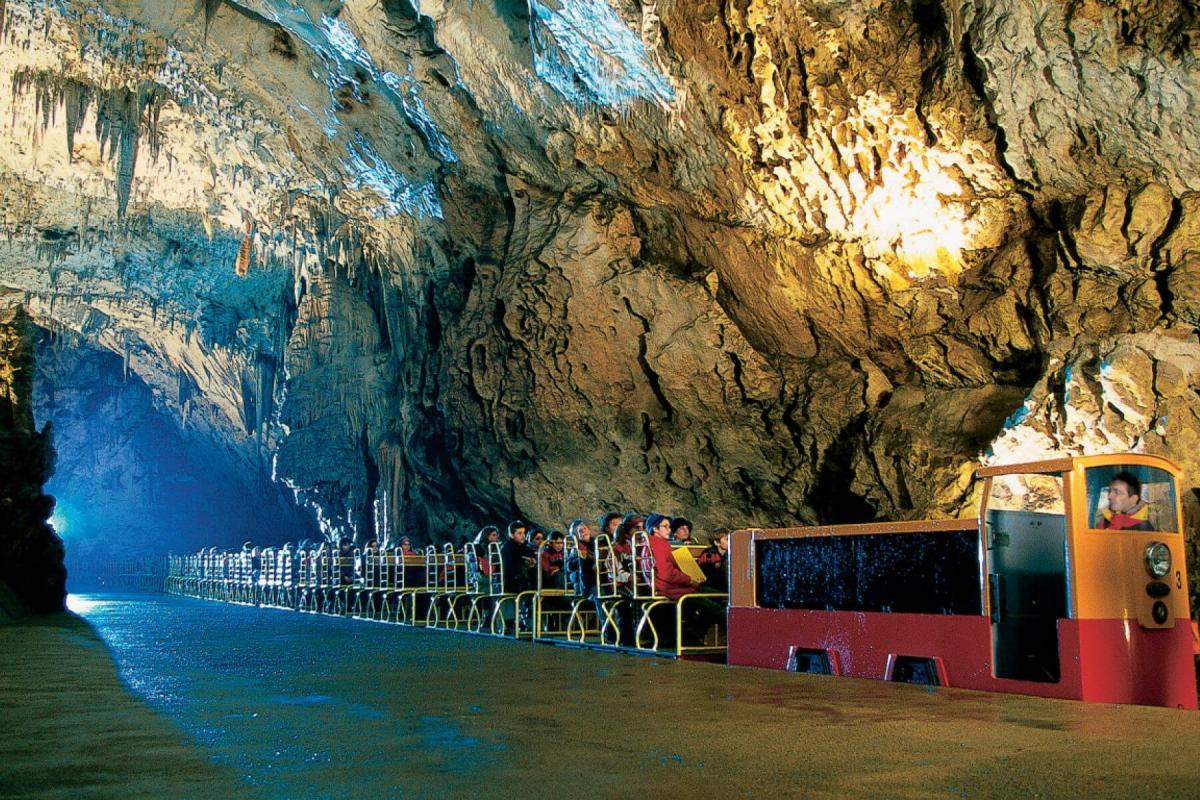 3.2km of Postojna Cave is covered by a cool electric train.

Water dissolving limestone created magnificent forms of stalagmites and stalactites, from which one stood out and became a symbol of Postojnska Cave. It is a magnificent five-meter-tall, crisp white stalagmite called The Brilliant with an ornament-rich column standing next to it.

There is another treasure, which can only be found here and nowhere else – The Baby Dragons. Pale, blind and fragile olms, with unusual formed bodies, were discovered here in 17th century and have been a natures enigma since then. They can go without food for up to twelve years and have a lifespan of up to 100 years. 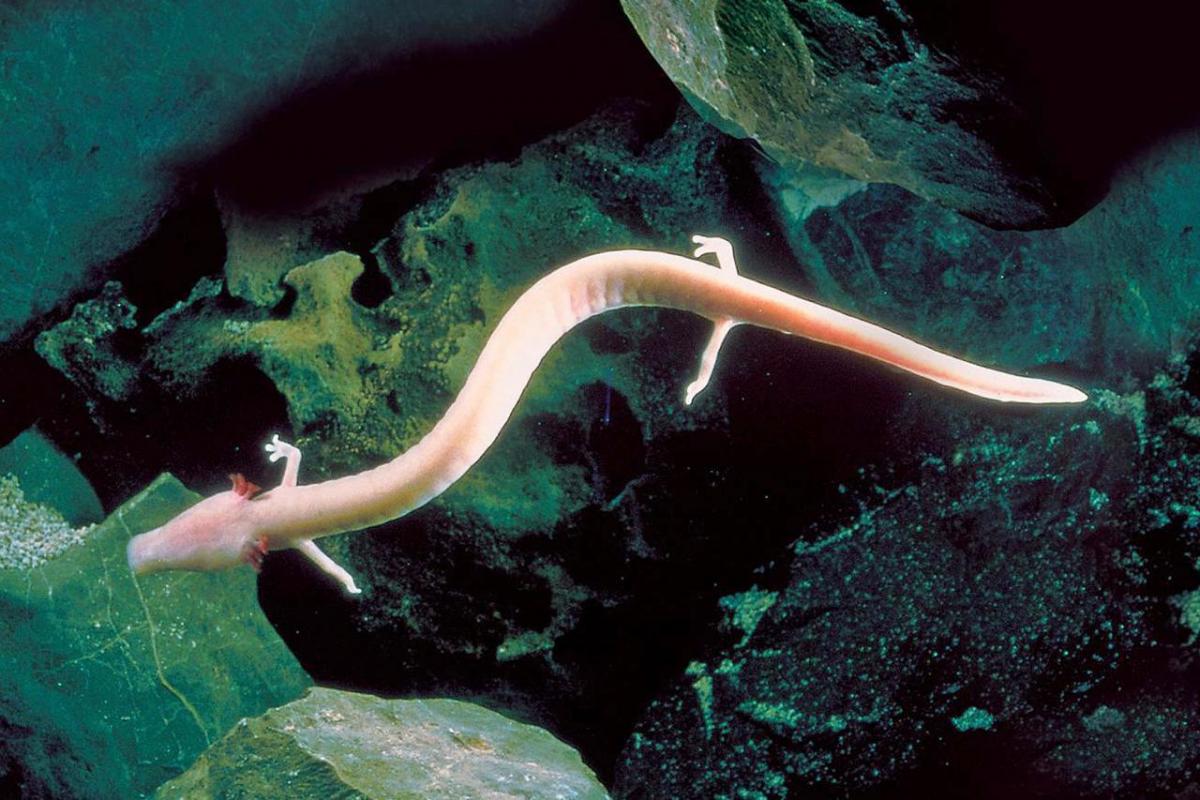 The olms' unusual appearance has been captivating people's imagination for centuries.

And that is not all! Just a few kilometers from Postojna Cave you'll find a majestic cave castle, called Predjama Castle. This world-famous attraction is a true delight for all who love the legends of knights and is a true symbiosis between nature and man best work. 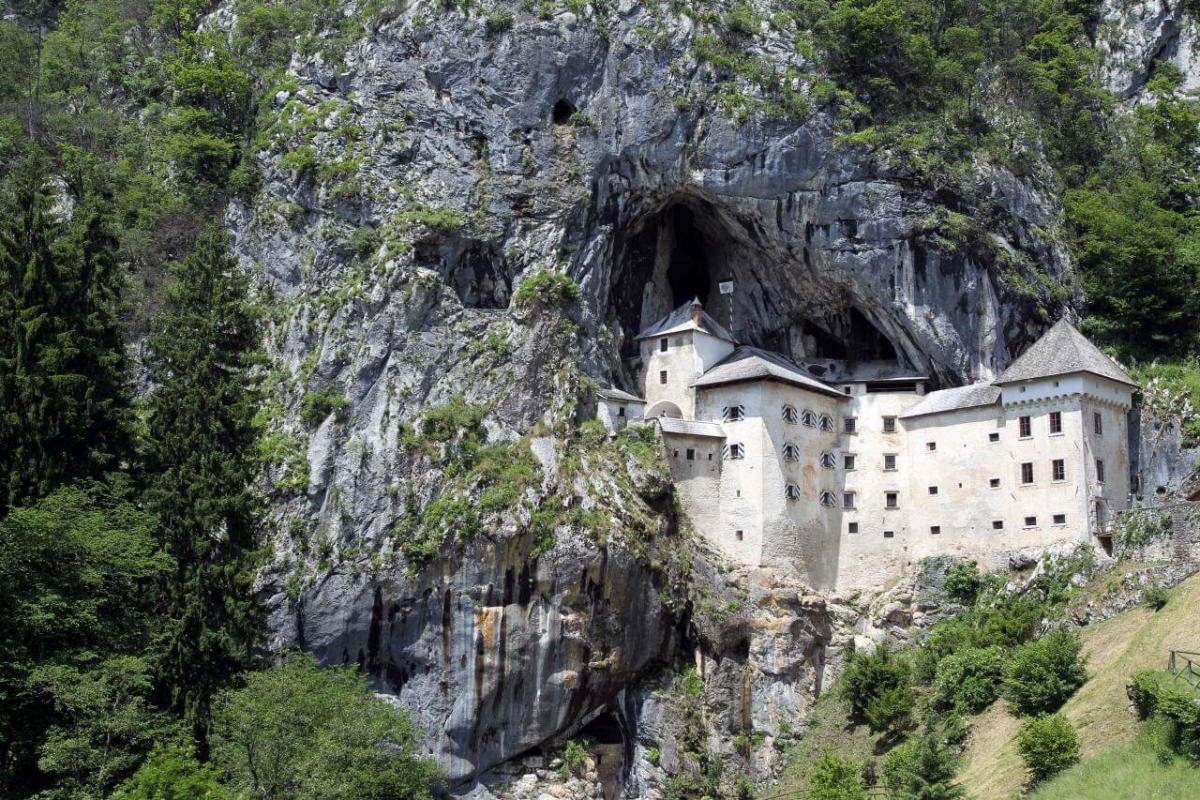 Predjama Castle is definitely worth a visit!

Postojnska Cave Park is open all year round, including on public holidays.
The guided tours run from 10AM – 4PM daily and with additional tour times from May to September, going from 9AM – 6PM.

Due to cave's constant temperature of 10°C, it is recommended to wear suitable clothes and shoes when visiting the Postojna Cave – something warm and comfortable.

The caves are easily accessible via the A1 motorway from Ljubljana, Koper or Trieste (Postojna motorway exit No. 41, which is two km from the Park).

There are three tours from which you can choose your adventure (see below), ticket prices vary between seasons.

The Caves of Škocjan

If you want to explore the caves in a more natural way or even stay for more than one day, then Škocjanske Caves are the ones you want to see and explore. With natural significance and extreme beauty, they were recognized as a true planet Earth’s treasure in 1986. They were entered on a list of natural world heritage sites protected by UNESCO, standing side by side the Grand Canyon and the Great Barrier Reef.

This underground phenomena was created by the stream of river Reka collapsing underground which resulted in the largest subterranean canyon in Europe (146 m high). Škocjan cave system has many kilometres of trails for visitors with no less than 500 steps. The trail leads you across incredible bridges allowing you to see underground waterfalls (there are no less than 26), grand halls, giant stalactites and stalagmites that have grown to 15 metres in height, and other underground creations made by the karst river. 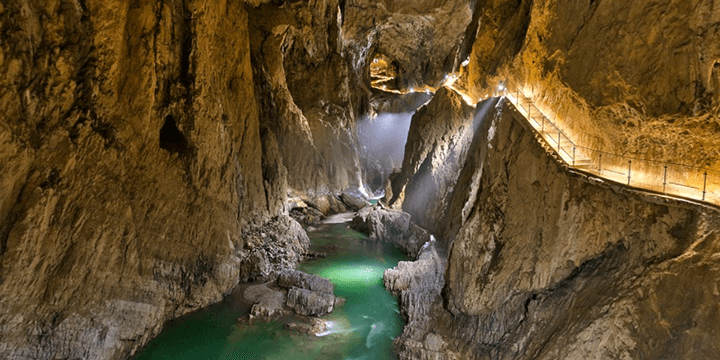 Škocjan Cave system has the largest underground canyon in Europe.

Exploring through a bit more than 6km of this underground treasure, you will also discover two impressive valleys, Velika Valley (165m) and Mala Valley (120m), which were formed about 400 years ago with the cave ceiling collapsing from approximately 200m. They are separated by the only remaining piece of the original cave ceiling forming a natural bridge.

Some of endangered species of birds and bats have found their home in the surroundings of the collapsed river valley, which forms a unique ecosystem and cave fauna, existing until this day.

There is a second entry to the caves, a 90m drop, abyss, called Okroglica. Just a few meters from that entry lies the village of Škocjan, which gave the caves their name.

The Škocjanske Caves are easily accessible via the A1 motorway from Ljubljana, Koper or Trieste, exit Divača. There is a lot to explore in this natural museum and there are three different tours through the park (see below), each from and in a different direction:

If you are one to explore, hike and stay off the beaten path, we have some suggestions on smaller and lesser- known caves you can visit on your trip around Slovenia. These are mostly free to visit, easy to find and access - usually by a short walk.

Our top 3 picks would be Snežna Cave or the Snow Cave, located right beneath the Raduha Mountain. Secondly Cave Pekel also called the Hell Cave, located near third largest city in Slovenia, Celje. And last, but not least, Križna Cave aka Cross Cave, located on Bloška polica. 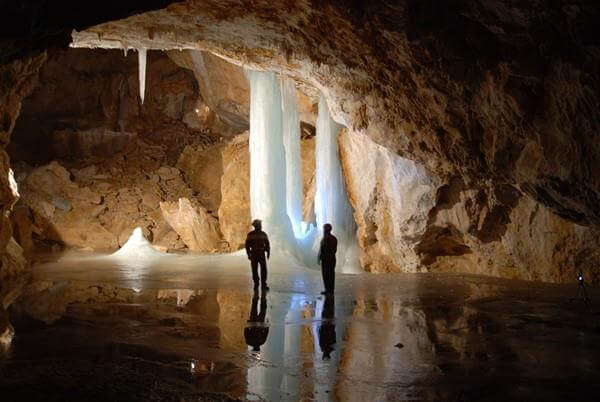 Snow Cave is the highest lying and oldest tourist cave in Slovenia.

However, the question remains – which one to choose?
We're not giving you the answer to that, but we are encouraging you to visit at least one of the caves mentioned above.

We hope you will take our advice and explore an incredible world beneath our world. And if you do, let us know which one was the best for you. 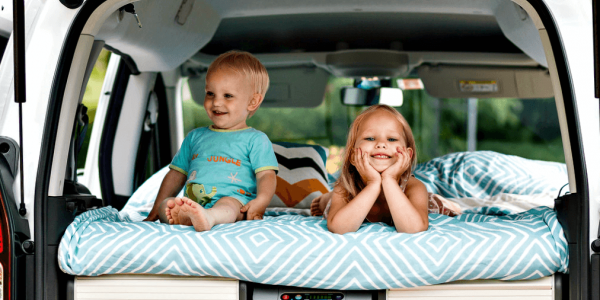 15 things you didn't know about Slovenia and its people 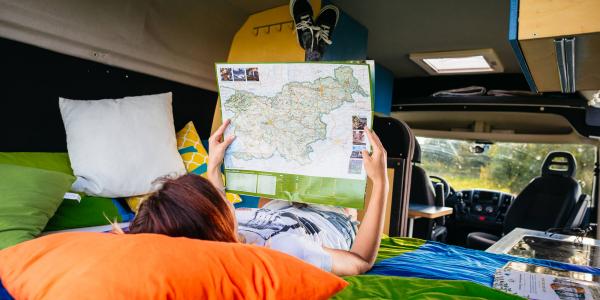 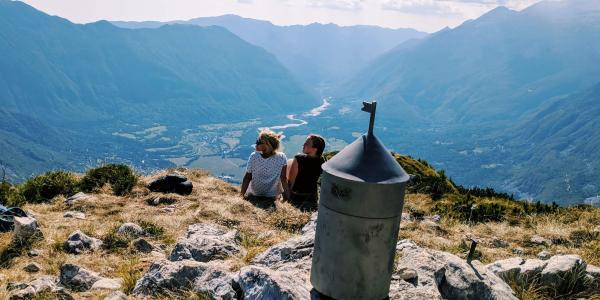 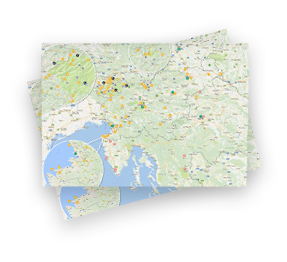 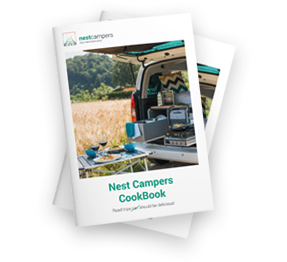